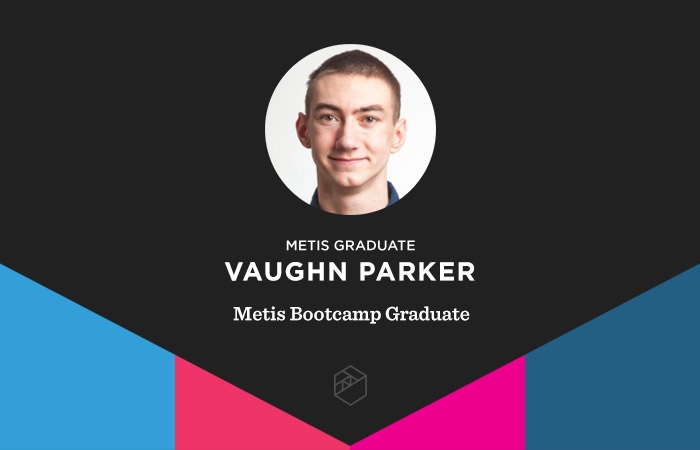 To this day, Vaughn Parker remains our youngest-ever bootcamp graduate. After applying and being accepted when he was fresh out of high school at just 17 years old, he had to wait until he turned 18 to enroll due to admissions requirements.

By that point, he’d long been into coding and programming, becoming increasingly interested in data science, especially after learning that Google’s AI AlphaGo defeated the world’s (human) Go champion back in 2016.

With a data science career now firmly in his sights, he began considering alternatives to college as he drew closer to high school graduation. Was a bootcamp the answer, he wondered? During his first post-high school summer, he decided to defer acceptance to the University of Illinois at Urbana Champaign and apply to bootcamps instead.

He got into Metis and officially enrolled after this 18th birthday. Of the 28 students in his cohort, he was the youngest and only one without a college degree. During his three months of projects and study, he found yet another aspect of data science that drew him in: Natural Language Processing (NLP), which involves computers parsing human speech.

“The basic thing that interests me so much about NLP is that it seems like an incredibly good opportunity right now because computers are better than humans at a lot of things,” said Vaughn. “They're better at addition; your calculator is way faster than any human. They're better at playing chess, better at playing Go. They're better at driving directions. But one task where humans are far better is producing natural language like English. I strongly believe that in 10, 20, 30 years, you're going to have computers that can speak natural language just as well as humans can.”

After the bootcamp, Vaughn worked as a pre-work TA at Metis, helping incoming students prepare for the intensive program. He also had a couple of internships before deciding to enroll in the University of Illinois after all, with the newly focused goal of merging his interests in language and data science. He currently studies computer science and linguistics and plans to pursue a career in advancing the capabilities of NLP.

“Natural language processing is still a field in its infancy. It's very young, very new, and it gets tremendously better every year. I think it's only a matter of time before we crack the code and figure out how human language really works,” he said.

As he builds toward that exciting future, he says he relies on the practical and quick-turnaround nature of his Metis training, mixed with his ongoing academic studies, which involve more theory. Additionally, he recently got an internship at Caterpillar’s Data Innovation Lab after participating in the Hack Illinois hackathon, where he was attracted to the company’s proposed challenge because of its focus on data science. With a given data set, he was tasked with figuring out when sensors broke on Caterpillar equipment and when they were sending faulty data. After performing well, Caterpillar offered him the internship, which allows him to continue working on sensor-related projects.

As Vaughn continues his learning journey through study and internships, he reflects back on his time in the bootcamp, noting how the experience propelled him to where he is now.

“I feel very lucky to have been younger than my cohort-mates because I was able to learn a lot more from them,” said Vaughn. “Overall, it wasn't too scary after the first day or two. And I learned a lot. I feel it was a great opportunity.”
_____