Demystifying Data Science: The Value of Storytelling with Visualizations 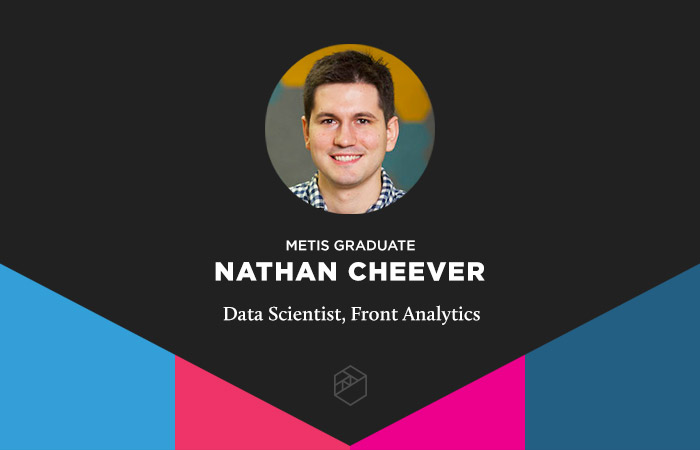 At the time of this Q&A, Metis Data Science Bootcamp graduate Nathan Cheever was a Data Visualization Engineer at Ancestry. He spoke about his day-to-day work and how his bootcamp experience prepared him for it. He's since moved on and is now a Data Scientist at Front Analytics, a data science coaching and consulting firm.

Tell me about your background. How did you become interested in data science?

I took an econometrics class in college and was introduced to R. I enjoyed working in it, and then one day on NPR I heard about the Data Science for Social Good program at the University of Chicago where they used R and Python. My interest was piqued and I started learning all I could about data science, reading tutorials and books, following influencers on Twitter and trying some projects on my own. I slowly began to realize the power of data science and programming to automate data processes and extract information from piles of data.

Describe your current role. What do you like about it? What are some challenges?

I'm currently at Ancestry working as a data visualization engineer. I like that this position gives me an opportunity to use Python to prepare data for visualizations in D3.js. I'm also learning lots about web development, both front and back end, which is fun! The biggest challenge is the process of thinking through how to make a visualization as impactful as possible while keeping it simple.

In your current role, what aspects of data science are you using regularly?

Definitely the visualization/storytelling parts of data science. Data science doesn't mean a thing if it's not communicated effectively, and that's what I'm hoping to develop while here at Ancestry.

Do you think the projects you did at Metis had a direct impact on your finding a job after graduation?

Absolutely! It gave lots of experience trying hard things and giving me the confidence to do just about anything I set my mind to. In the interviews, I showed this confidence, and along with talking about my experiences, I think that had a big impact.

What would you say to a current Metis applicant? What should they be prepared for? What can they expect from the bootcamp and the overall experience?

Prepare for doing data science by understanding the kinds of problems it can and can't solve. I'm reading a book now called Data Science for Business and it would have been helpful going into the bootcamp. Be prepared to work hard and hit walls. It won't come easy at first but that struggle is where all the learning is, and after the bootcamp you'll not be afraid of struggling - you'll find it challenging and fun. They can expect to learn about interviewing, networking, and coding, but like anything, what you put in is what you get out. Put in all your attention and energy and it will pay you back in the future.