Demystifying Data Science: The Role of Data in Cyber Security 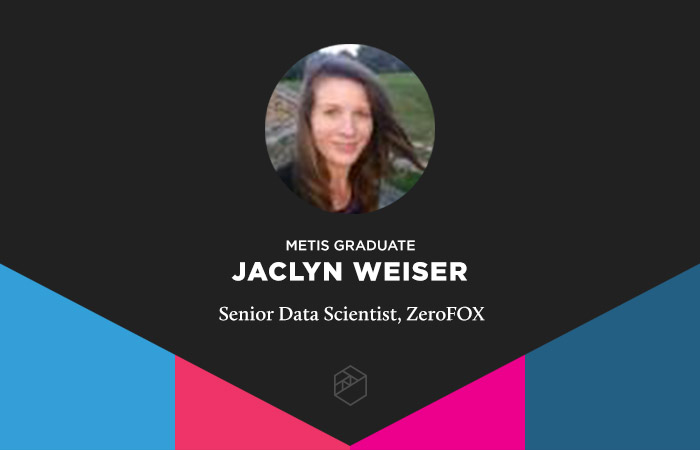 Jaclyn Weiser graduated from the Metis Data Science Bootcamp in July 2015, after which she joined ZeroFOX as a Senior Data Scientist. In this Q&A, she talks about her role at the social media cybersecurity startup, her time at Metis, and the tools she's using on a regular basis to get the job done. Since this article was written, she's moved on to new, exciting roles in data science. Check out her LinkedIn profile for details.

Tell me about your background. How did you become interested in data science?

I've kind of been doing data science for a long time actually. It just wasn't called data science. I double majored in Math and Physics in undergrad and then got a Master's Degree in Applied Math from Northwestern.

I spent about 2 years working in investment modeling at Bank of America (which I hated) and 7 years working as a Sr. Consultant in Data Analytics in CNA's Enterprise Risk Management team. I liked analyzing millions of buildings and their characteristics and creating both natural and man-made catastrophe models. But after nearly 10 years, I was looking for a change from the finance world and had a hard time convincing tech companies that I was qualified for a lateral move.

Describe your current role. What do you like about it? What are some challenges?

I took a Sr. Data Scientist role on the research team at ZeroFOX, a well-established social media cyber security startup based in Baltimore, though I mostly work from home in Brooklyn.

The research team has a couple of engineers and two other data scientists, as well as a threat researcher. I work from Baltimore one week a month and it's always fun to reconnect with my team, as they are a great group of curious and creative guys. Since starting here in September, I have built and deployed quite a few classifiers using social media data, submitted a paper to a security conference, and wrote a company blog post. I also had to learn JavaScript to write for our rule engine. I love my team and I love that the majority of my work is actual data science.

We just got a giant series-B infusion and are expanding like crazy. It's an exciting time. The challenges are that in a 100-person company, there are about 15 women, no female executives or board members, and I am the only technical female. Many of the technical people are pretty hardcore software engineers and as I'm mostly self-taught; having to write production quality code within a scrum cycle all the time can be pretty draining when I really just want to play with data all day. Though I know ultimately this is something that will help me. Also, unsurprisingly, anything I work on has to drive sales, which is not always the fun stuff I'm interested in, but we do get 20% of our time dedicated to unstructured research. Much of my personal learning (time spent reading research papers and trying out new techniques) is done on my own time.

In your current role, what aspects of data science are you using regularly?

Do you think the projects you did at Metis had a direct impact on your finding a job after graduation?

I think particularly the final project was pretty useful, because in interviews you need to walk them through a specific project you worked on. Though I would advise incoming students to start researching data sources and collecting data before they even get to day one of class, so they can focus on the analysis and presentation rather than having to scrap something because the data isn't available, with little time to spare for a new idea.

What would you say to a current Metis applicant? What should they be prepared for? What can they expect from the bootcamp and the overall experience?

I use many of the skills I learned at Metis every day, though I have taught myself a lot of new things since then, so I'd say it was a good foundation and catalyst for future learning. Like many data science projects, the bootcamp is as good as the time you put into it. You will have a lot of new techniques thrown at you and little time to be great at all of them right away. Select a few things that interest you or that you see listed in jobs you want and become an expert in them