Demystifying Data Science: One Grad's Work to Expand the Reach of Facebook Messenger 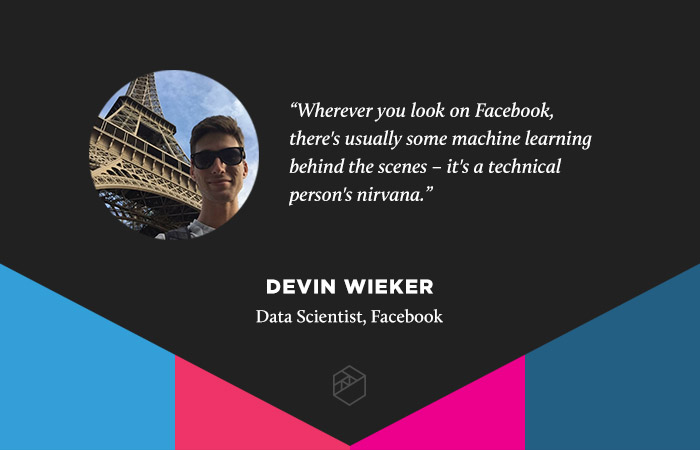 This post was written by Metis Contributing Writer Emily Blackwood.

Recent reports indicate that Facebook Messenger continues its growth, now boasting more than 1.2 billion users worldwide. Behind the scenes of all those messages connecting people across the globe is a large team of people with smart, technical minds working to meet aggressive goals.

Metis graduate Devin Wieker has one such mind. He’s a Data Scientist at Facebook’s Bay Area headquarters, where he’s focused specifically on Messenger growth and where he soaks in the highly technical work and environment.

“Wherever you look on Facebook, there's usually some machine learning behind the scenes,” he said. “It's a technical person's nirvana.”

This sense of nirvana certainly does not come without challenges. Working with a team of this caliber can cause a sense of intimidation from time to time, according to Wieker.

“Think about the smartest people you've worked with in the past,” he said, “and imagine what it'd be like if almost everybody you worked with were that talented. It's humbling and I learn more every day, but there's a pressure to always be at your best."

His day-to-day work keeps him both busy and hyper-challenged. He does everything from building data-aggregation pipelines that transform raw server and client logs into a readily usable format, to working with the engineering teams to set up nuanced A/B experiments, to checking the results of various ongoing experiments being run. He also presents general updates on the state of specific product areas and does some exploratory analyses in search of potential growth opportunities.

Wieker graduated with a Bachelor's degree in Physics from California Polytechnic University in 2016. Not sure what to do next, he says a combination of interests led him to data science and then ultimately to the Metis Data Science Bootcamp.

“I wasn't confident that I wanted to miss out on five years of sleep working towards a physics Ph.D.,” he said. “Data science seemed like an interesting intersection between math, computer science, and analytical thinking.”

During his time at Metis, he worked on projects that dealt with computational work, like running particle accelerator simulations and using computer vision to track moving microscopic particles. These experiences gave him the confidence and skill sets needed to go after what many would consider a dream gig.

Which is likely why, when we ended the interview by asking what advice he might have for incoming bootcamp students, he re-emphasized the project portfolio.

“Be prepared for some possibly challenging concepts, like neural network gradient descent optimization algorithms, and be ready to be frustrated when you hit a wall in your projects,” he said. “It's all worth it in the end when you can showcase an impressive project and walk away with way more industry valuable skills.”

Curious to learn more about our Data Science Bootcamp? Check it out here!