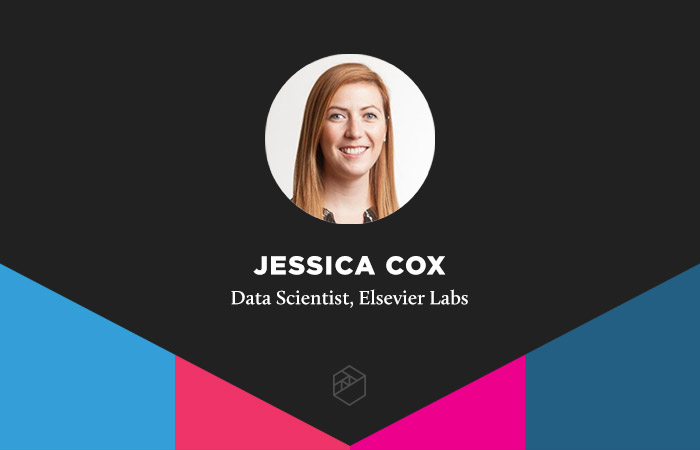 This post was written by Metis Contributing Writer Emily Blackwood.
_____

The road to a career in data science is often unpaved and unpredictable. For Metis alumna Jessica Cox, it started with a bachelor’s degree in biochemistry and led to her current role as Data Scientist at Elsevier Labs, a scientific publishing company.

During her undergraduate studies, she realized how much she adored research. She followed that passion through to a Ph.D. in Biomedical Science from The Ohio State University, focused on environmental health and nutrition research. That’s when another life-changing realization hit her: she loved data.

“I was not getting enough of it, and so I needed to do something about that,” she said. “ I did my post-doc at Columbia University, and I switched my focus away from traditional bench studies more toward public health studies. That really gave me my first opportunity to work with big data.”

She became interested in coding, learning Sas and R, and eventually heard the term data science for the first time. It started becoming clear to her that a traditional career in academia would largely tear her away from the things she was enjoying most about her work and studies.

“I really found I was happiest was when I was analyzing the data and actually seeing a pattern to make a story out of something,” she said.

By the time her fellowship came to end, Cox was determined to seek data science opportunities, looking to combine interests like working with data, coding, and solving interesting problems into one career. She attended the Metis Data Science Bootcamp in New York City before landing her current role as a Data Scientist at Elsevier Labs, where her scientific background merges with her passion for data. For the role, she helps determine what technologies the company should be investing in and what’s on the horizon for the next three to five years, providing big-picture thinking to company stakeholders. She also works on projects like creating software for image detection in scientific journals and coming up with efficient ways for writers and editors to accurately and efficiently source and cite existing scientific works.

Though creativity might not be the first skill that comes to mind when people think of data science, it’s necessary for this line of work, according to Cox.

This freedom provides an opportunity to use some of the hard machine learning and data science skills picked up while at Metis, a program that appealed to her in large part because it didn’t require going back into traditional academia. But a significant part of the bootcamp experience also focuses on soft skills like effective communication, which has been important to her role at Elsevier Labs.

“I think because it’s a research role, and it requires a lot of creativity, it's really fun and easy to kind of get on this runaway train of ideas, but then it's about putting it all into context,” she said. “We have to keep in mind that we have a budget to work with, we have certain resources we can and can't use...and so trying to reign in all the ideas and realize that, at some point, we  need to bring this to upper management and really convey what will be the next steps.”